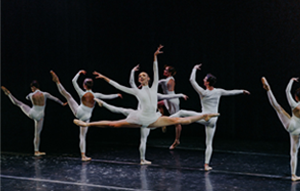 Ally Helman Is Dancing, Directing and Creating on Her Own Terms at Ballet Project OC

Creating a ballet company, a streaming service and a digital marketplace during a pandemic might seem daunting to most, but not to 21-year-old Ally Helman. Wanting to take more control over her career, the former New York City Ballet apprentice launched Ballet Project OC and the streaming platform Ballet Project TV out of sheer determination, an innate sense of leadership and a clear artistic vision. “I never thought I would be here today,” she says. “I am grateful—but the path has not been easy by any means.”

That path started in Anaheim, California, where she began ballet at a young age and eventually pursued more serious training at Maple Conservatory of Dance in Irvine. After attending three summer courses at the School of American Ballet, Helman moved to New York City to enter SAB’s advanced division when she was only 14. She initially felt behind. “I was the young girl in the big class, and that’s what started the fire of ‘Okay, I need to work two times harder than everyone in here to get up to par,’” says Helman. In her final year at SAB, Helman was offered an apprenticeship with NYCB.

But in 2019, after one year as an apprentice, she was unexpectedly let go while the company was undergoing a leadership change. Helman had already planned to return to Orange County during the company’s summer layoff—she was itching to choreograph more, a passion discovered during SAB’s annual Student Choreographic Workshop. She wanted to give herself and other choreographers the opportunity to create in a more relaxed, family-like environment. But losing her NYCB contract left her at “one of the lowest points of my life,” she says. At first she wasn’t confident she could spearhead her own project. But after some time, she says, “I thought: I have to do this—if I don’t, I have nothing.”

Determined, she returned home and set to work, calling her new venture “Ballet Project OC.” She put together a program that included new ballets she had created, as well as pieces from fellow NYCB dancer Gilbert Bolden III and choreographer Norbert De La Cruz III. Utilizing her network at home, she hired about 10 local dancers (including some classmates from SAB) and held rehearsals at the Maple Conservatory. She funded the performance mainly through donations from local businesses and advertised on social media. The troupe put on two well-attended shows that August at the Curtis Theatre in Brea, California.

After the event’s success, Helman began planning another Ballet Project OC show for the summer of 2020, wanting to make it a seasonal gig. In the meantime, she relocated temporarily to Seattle to train with Pacific Northwest Ballet School’s Professional Division, an experience cut short by the pandemic.

Growing Through a Pandemic

She returned home in March, and began to feel drawn to working on her own terms. Because of pandemic restrictions, she realized that Ballet Project OC’s summer performance would have to be virtual. With help from her father, Jon Helman, who has a background in business and technology, and her sister Emily Helman (also a dancer), Ally and her family focused on an additional endeavor: Ballet Project TV, a streaming-service website and marketplace.

Conceived almost as a social media platform, Ballet Project TV allows dancers, choreographers, teachers and companies to stream performances or build their own virtual shops (where members can sell tickets and other merchandise, like classes or handmade dancewear). The goal is to help artists increase their exposure and revenue—a timely venture given the pandemic. Jon fundraised for and promoted Ballet Project TV on existing social media platforms to attract members and explain the site to local companies and schools. They had it up and running within a month.

With a platform in place, Ballet Project OC has been able to stream five virtual performances since last summer—and build as a company in the process. (The most recent performance, in May, welcomed a limited audience back into the Curtis Theatre.) In the meantime, Helman has gotten used to running her own show. She wakes up early for HIIT workouts, teaches or takes company class (or her own class in-between projects), and rehearses and choreographs during the day while also doing administrative duties. At night she stays up late to design costumes or finish homework for online college classes. While she handles most of Ballet Project OC’s artistic work—programming, hiring dancers and choreographers, casting, costumes, lighting—Jon handles the majority of the administrative work (for both the dance company and Ballet Project TV) and fundraising. Emily helps with social media and marketing.

The company, now preparing for its next performance on August 7, has since increased to 20 dancers (full disclosure: I am one of them), paid per project. Classes and rehearsals take place in Ballet Project OC’s Studio 1, a full studio with a sprung floor and mirrors built by Jon in his company’s office building. “Eventually we want to build our own studio, build a school, and have the company full-time,” says Ally. “In 10 years, I will probably be fully immersed in the directorship.”

While Helman is busy with Ballet Project OC and TV, she is also auditioning for other companies. “I’m still hoping for a job, but with the way the world is looking, I have come to the conclusion that it may not happen, and that’s okay. Or it may happen and I’ll have to make some changes. The work here is just as gratifying as bowing onstage at the Koch Theater.”

To finish activating your account, check your inbox for our Welcome message and confirm your email address.